Kissir The dam was constructed on river Kissir at north-east part of Algeria, near the city of JIJEL, about 1 km from the Mediteranean coast. Purpose of the dam is water supply to city of Jijel and irrigation of coastal region.
Read the Full Story
Prvonek
Storage reservoir „Prvonek“ will provide drinking water to Vranjska Banja,Vranje, Bujanovac, Preševo.
Read the Full Story
Dam Sarrath The dam was constructed on river SARRATH in west part of Tunisia, near the town of EL KEF and it will be used for water supply and irrigation of region of Boughanem and Mahjouba.
Read the Full Story
Tunel - Interceptor Sewer INTERCEPTOR, Usce-Veliko Selo, is designed as solution for collection and transfer of waste water and part of rain water from central sewerage system of Belgrade, including Novi Beograd and Zemun. Waste water will be collected and transferred downstream from the city to river Danube.
Read the Full Story
Current projects

We have 53 guests online

Dam „Arilje-Profil Svračkovo“ is located at river Rzav about 8 km upstream from town of Arilje. The Contract for construction of the dam was signed in December 2011, and the works have commenced in April 2012.

The initial stage of works on construction of the dam is related to excavation of material in area of shaft spillway. Excavation of material is performed by blasting, since it is a hard rock, the limestone. Upon delivery of mechanization and forming of the jobsite, construction of the access road to the place of works has started from the existing road to the future dam crest at level 423,60 m.a.s.l. The beginning of excavation was at level of 488,60 m.a.s.l. It has been provided by the Design that the excavation will be executed in levels of 5 m with slope inclination of 5:1. Until 20.09.2012, the excavation was made up to level 443,60 m.a.s.l.  Inclusive with 20.09.2012, total of 51.000 m3 has been excavated that is hauled to two stock piles, depending on quality of material, downstream from the dam. 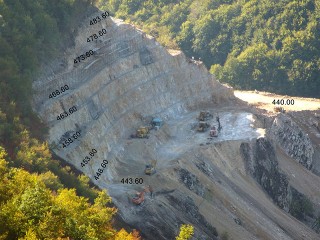 Material with good quality is deposited at the stock pile that is about 800 m downstream from the dam and it will be used later for embankment of the dam. Material with poor quality (that cannot be used for filling of the dam embankment) is deposited at place of future camp site and part of construction facilities that is located about 1.300 m downstream from the dam. This material is spread at the stock pile in layers of 50 cm and compacted in order to form the construction camp site on it later and part of construction facilities.

Beside the excavation, the Design has provided to make protection of excavation slopes by anchors, wire mesh and shotcrete. The works at the item of slope protection have started by middle of August 2012, by placing of anchors and wire mesh from level 488,60 m.a.s.l. until level 468,60 m.a.s.l. and currently works on placing of shotcrete are underway. Until 20.09.2012, about 100 m3 of shotcrete, 1.000 m2 of wire mesh and 200 anchors have been placed.

By the Schedule of Works for 2012, it was provided that the excavation, together with protection of slopes, will be made up to level of 423,60 m.a.s.l. It was planned that the works in this year will performed until 1st of December. If the weather would allow, the works would be continued after 1st of December at the item of excavation up to level 411,00 m.a.s.l. By completion of excavation up to level 411,00 m.a.s.l. the conditions would be fulfilled for forming of a part of construction facilities where it is planned to erect the concrete plant, site laboratory, carpentry shop and steel bending shop.